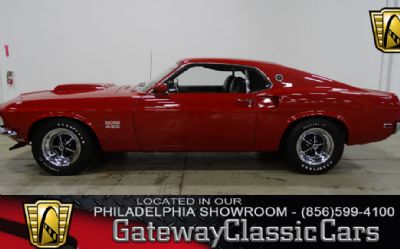 Contact
✉ View Car Report Abuse
Contact
✉ View Car
Report Abuse
Gateway Classic Cars is thrilled to offer this extraordinary piece of American automotive history, a two-owner 1969 Ford Mustang Boss 429 with just over 24,100 actual miles! This legendary car was built for one reason and one reason only win races. The battle for waged upon the speedways of the NASCAR circuit with the top dogs, Chrysler and Ford fighting for dominance each weekend. Chryslers introduction of the 426 Hemi engine in 1964 rocked the racing world and prompted Ford to come up with a necessary response. The answer, the Boss 429, a mythical powerplant designed to run longer and stronger than the famed Hemi. In accordance to NASCARs rule requiring manufacturers to release a limited number of legal street versions to the public, Ford chose the Mustang to be the recipient of this mighty power. The Boss 429 was derived from the 385 series engines, bored out and stroked to 429 cubic inches and topped with aluminum semi-hemispherical cylinder heads designed to move a lot of air. The impressive engines size required extensive modifications to the Mustang body and Ford contracted Kar KraftÂ® to carry out the task. Basic sportsroof Mustangs were sent to Brighton, MI where they underwent front-end modifications to accommodate the 429. Once in place, they made several other changes to the car include repositioning of the battery to the trunk, rear sway bar, manually controlled hood scoop and a 3.91 ratio rear axle with a limited slip differential! Production began in 1968 and oversaw 859 Boss 9s completed, two of which were Mercury Cougars. This is one of those revered vehicles in true survivor form! Wearing its original Candy Apple Red paint, this Boss is truly a rare find! Purchased new at Don Rice Ford in Bedford, PA in May 1969, this Boss retains 99% of the original components found on it including AutoliteÂ® belts! All factory chalk marks are still present and visible! How often do you come upon unique details like that?! Its all there including the floor mounted shift lever, flawless high back vinyl bucket seats, deluxe seat belts, color keyed racing mirrors and handsome woodgrain paneling! Turn the key to hear the sweet rumble of the 429 that conveys the message that the Boss means business. This car has been meticulously maintained by its current owner for over forty years. This Mustang is a true time capsule that continues to tell the incredible story of performance innovation and preserves American automobile history. The opportunity to own a piece of history is now here and it calls for someone to be the next keeper of legends, is it you? Additional features include Original Bill of Sale and an Elite Marti Report by Marti Auto WorksÂ®, AM/FM Radio with Cassette, Power Steering, Power Brakes and Seat Belts. To view this 1969 Ford Mustang Boss 429 in greater detail, including HD pictures and an HD video, visit www.GatewayClassicCars.com or our Philadelphia showroom located in West Deptford, NJ. For more information, please call 856-599-4100 or email Philadelphia@GatewayClassicCars.com
Similar Ads found near
Please select from the list of violations below.